When Windrush Creek was first envisioned back in the early 1970’s, it was planned as an equestrian community.  In the original plat maps, the individual properties were much smaller and over half of the nearly 65 acres, making up Windrush I was set aside as riding paths.  A stable was planned for the corner of Havens Corners Rd. and Taylor Station.  Before the first house was constructed, the developer dropped the idea of the equestrian community in favor of larger lots and a planned development.  Our POA was one of the very first community corporations in the State of Ohio for a community association not part of a condominium community.

It differs from a condo association in that each home is a fee simple property and you own the inside, outside and the land surrounding your home.  You are automatically a member of the POA when you buy a property in Windrush Creek POA and as such there are certain rules that apply to all properties in the association.  Some of those rules are holdovers from the equestrian concept.  Because there were bridle paths around, behind and between each property, no fences were allowed.

This gives us a unique open feeling that remains today.  Each home is unique, making us different from the planned cookie cutter condo communities.  We each have a role in keeping Windrush Creek the special place in Franklin County that we love and call home.

Spacious common areas, large lots and natural beauty draw new residents to Windrush.  As you settle in, you will appreciate even more that this community is a treasure, a gem of a location that supports both private and communal goals.  You are in the right place with good neighbors.

Pond and Fountain
Benches to watch the fountain and catch-and-release fishing.

Landscaping
Look for the native plantings and fruit trees as you walk the neighborhood.

Picnic Areas
Two handsome, low-profile firepits with plenty of seating around them.

Little Free Library
Marcia and Bill Evans installed the freestanding library in the Brooksong area with collections for kids and adults. No fees, but be sure to check it out.

Annual Awards
The trustees give an award for citizenship and one for landscaping to deserving residents at the annual POA meeting. 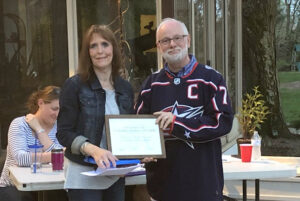 Goes to a Windrush POA resident(s) whose exterior house and facilities
presentation and landscaping of their property have over the last
year contributed to the goals of making our community beautiful and
verdant.

May not be a current member of the Board of Trustees, nor the spouse
or partner of a current Board member. Not to be awarded to the same
homeowner two years in a row. First priority for the award goes
to homeowners who do their own landscaping rather than hiring a
service. 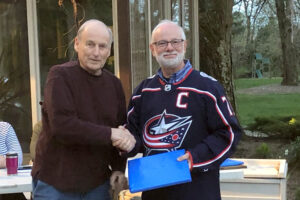 Goes to a Windrush POA resident who over the last year contributed
significantly to the Association’s well-being and sense of community.
May not be a current member, spouse or partner of the Board of
Trustees. Not to be awarded to the same person two years in a row.